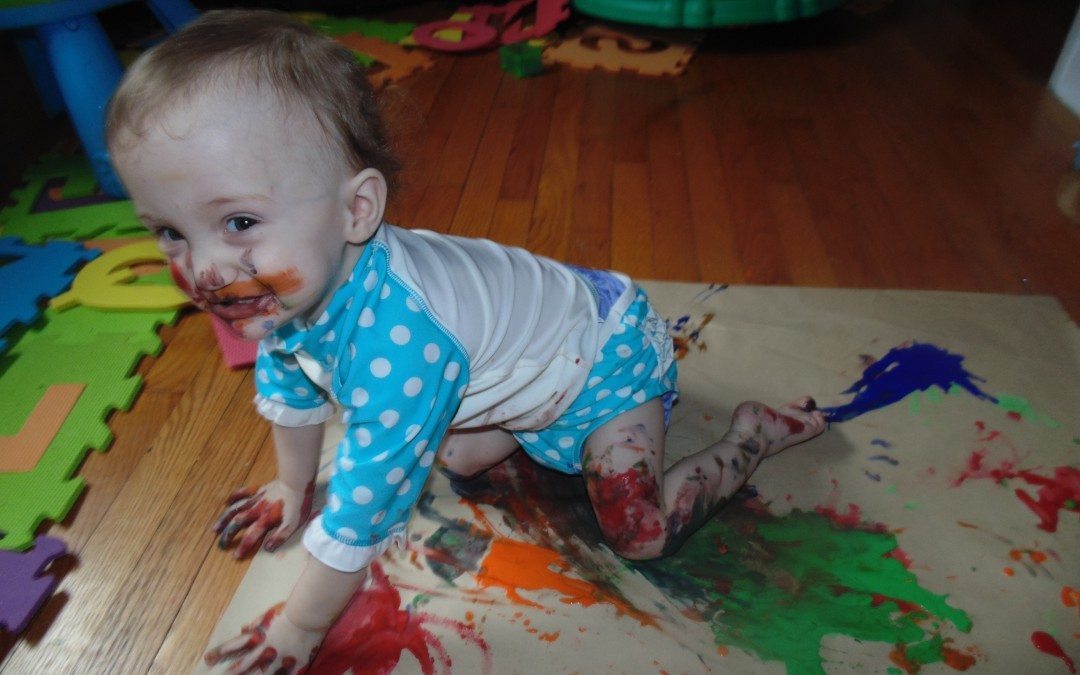 My little 17-month old girl is growing up too fast.

We are at the point now where everyday there is something new for her to discover – whether it’s opening the mail for me, and shredding its contents into paper “snowflakes”, or crawling up to me with a book, and yelling at me while thrusting it into my lap, even though it is the 15th time we have read that same book today (you would think having over 20 different cardboard books at her disposal, she would at least bring different books…)

Today we did something new… together. Because the snow has begun to melt, I peeked out the window this morning, and saw the black Rubbermaid box outside on the deck, which I had put out in October, but never quite made it to the shed – apparently this particular box’s legs did not sprout in time to move itself. Regardless, it made it that much easier to access, and in this precious black box was a container full of paints from MY childhood. Most were blue cans of paint powder, but there were four 1-litre jugs of liquid Crayola paint just begging to be opened. I changed Peyton into a long-sleeved bathing suit, and cleared an area in her playroom. After prepping the paint and putting a relatively small amount into 4 plastic dishes, I set everything up. After showing her what our agenda was, she was pretty excited to see the paper taped to the floor, and didn’t quite understand what she was supposed to do. After I handed her a toothbrush, and tried to show her to dip the brush then spread it onto the paper, it became an instrument, and she insisted on tapping everything with her new drumstick (which was now covered in paint).

After very excitedly “tapping” everything within arm range, she began taste-testing the non-toxic children’s paint with her “toothbrush”, which in hindsight, I think she was trying to imitate what I do with the toothbrush each morning. She is too smart. Smart enough to realize that the paint tasted absolutely disgusting, and promptly stopped shoving it into her mouth. So, I figured, if we are going to make a mess, we may as well go all out. I dipped her hand into the red, and then placed her hand on the paper, and showed her a pretty handprint. That just ensued chaos – my bad. She started dumping the paint, which means now, not only am I on camera duty, but I have to balance 3 different colours while trying to let her play with just one at a time. Again, hindsight, next time we stick to 2 colours, and do some mixing part way through!

The paint started getting “spread”, which for Peyton means flung as far as she can physically launch something. It was like she was trying to dig a hole through the paper, while sitting in the midst of it.

After the paper was covered with “art”, Peyton decided that she would start redecorating… so she started painting the floor, her foam mat, the walls… basically, anything she could get her hands on, the cat included! Poor unsuspecting Delilah, minding her own business, where she thought she was out of baby-reach. Ten seconds and about 3 tablespoons of green paint later, we had a black cat with two green front paws, and an extremely excited baby, who was screaming “Cat! Cat!” trying to catch her, while Delilah made a mad dash out of the room, tracking green paint all the way down the hall. Ok, so the time came to start wrapping things up. Peyton was starting to get distracted, and is running out of letters to paint, so I put her up onto the change table, and start stacking the paint buckets, and getting her towel ready for her much-needed bath time.

Big mistake. Why did I not wipe her hands first? My white change table was quickly being converted to an off-brown/green colour, which I guess is really no worse than some of the poops that come out of her. Correct location, right? Luckily, she knows not to stand on the changetable, so her range in wall-painting was fairly limited – only Pooh Bear had a small makeover. That, and her poor mittens that were caught in the crossfire, and her legs. Nothing a wash can’t fix. So, we make our way to the bath tub, and within about 2 minutes, the bath water has turned a slimy green colour. Since we are into making messes today ANYWAY the bath tub, and figured out how to make the shower head come on (pulling that silver button up). Can’t say she was much of a fan of having the running water sprayed all over her from up top, but she learned very quickly not to pull that button up!, I just let her splash all and splash. Green water got over everything, and two different towels made it into the bathtub with her, but she LOVED it! She was crawling around

Good thing Noel wasn’t home, or I think he may have had an anxiety attack. If he thought the birthday cake made a big mess… man, this was awesome!

Have you had a messy play date recently? I would love to hear all about it in the comments.

Looking for an awesome idea for what to do with paintings like this? Stay tuned for our monthly craft this month – it’s a great idea, and super adorable!