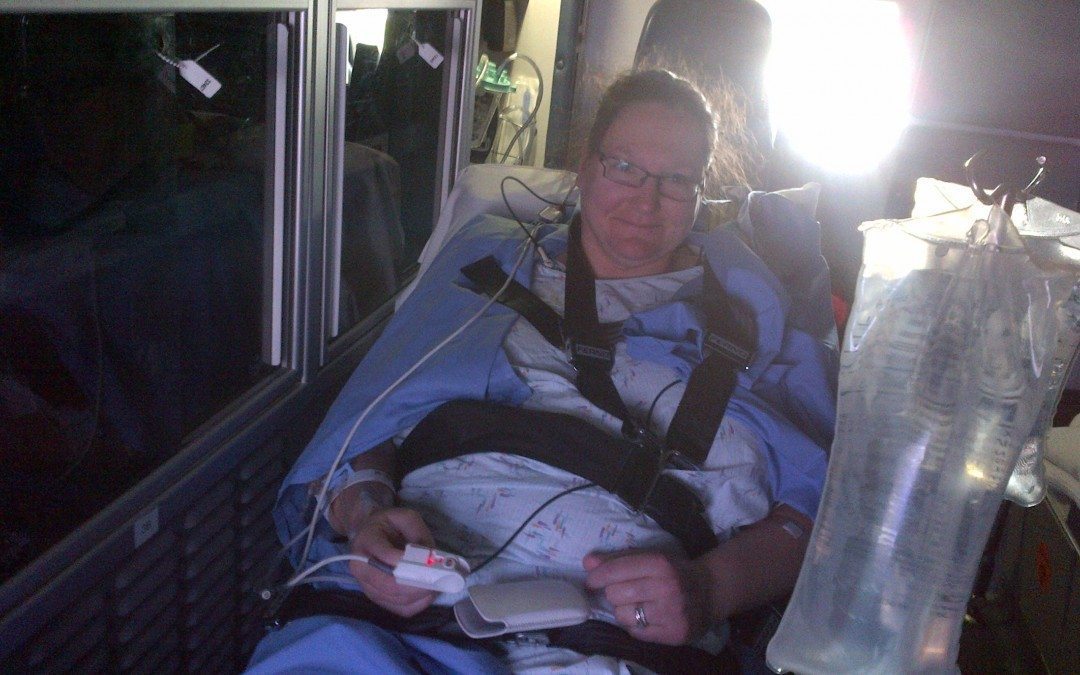 (If you missed The Beginning (Part 1), please read it here) 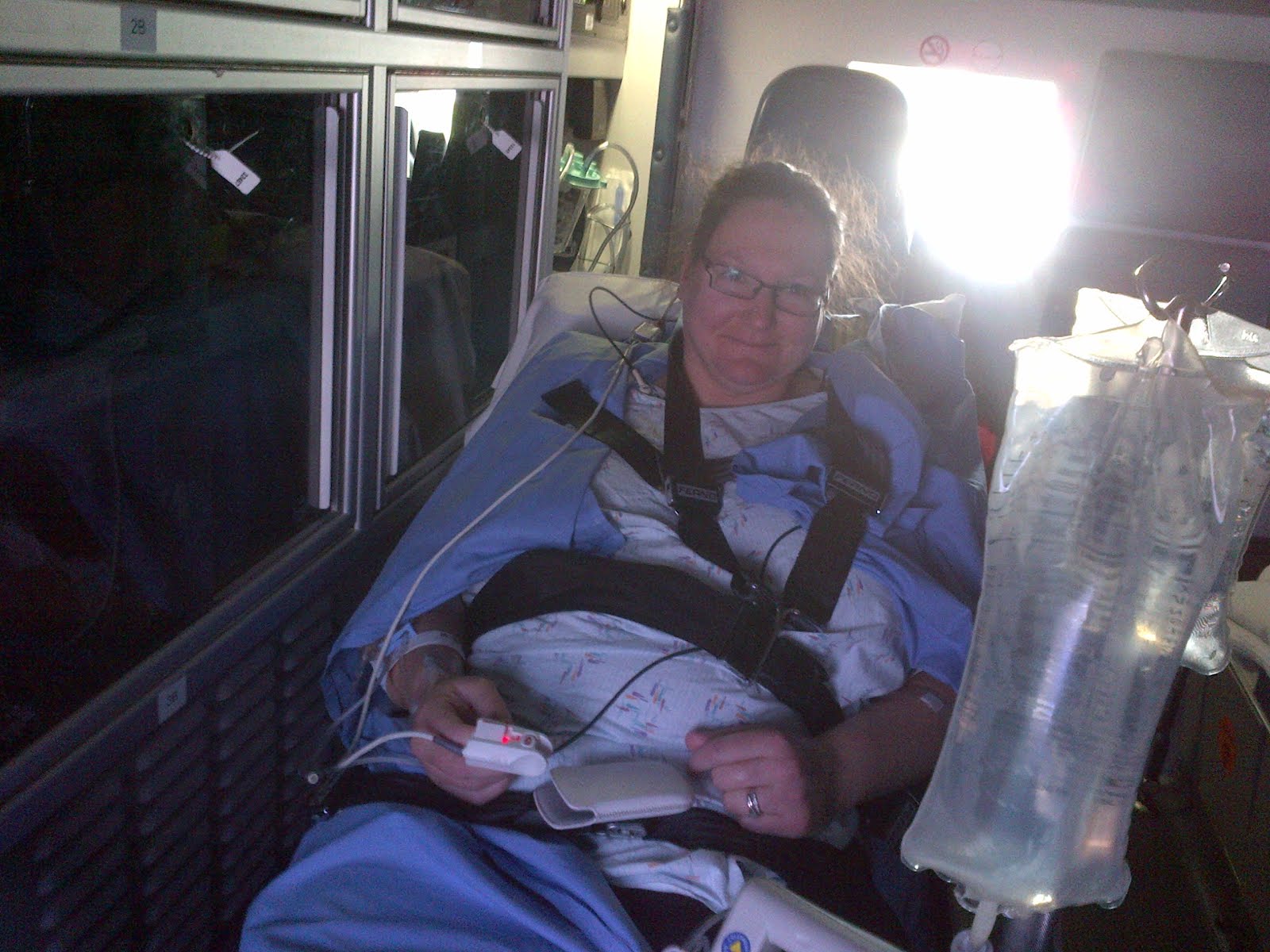 Smile – first time in an ambulance!

Noel ended up beating me to the hospital, and had a doctor brief him on what was happening – I’m glad someone knew, cause I sure as heck didn’t have much of a clue.

However, the following 48 hours are a bit of a blur: 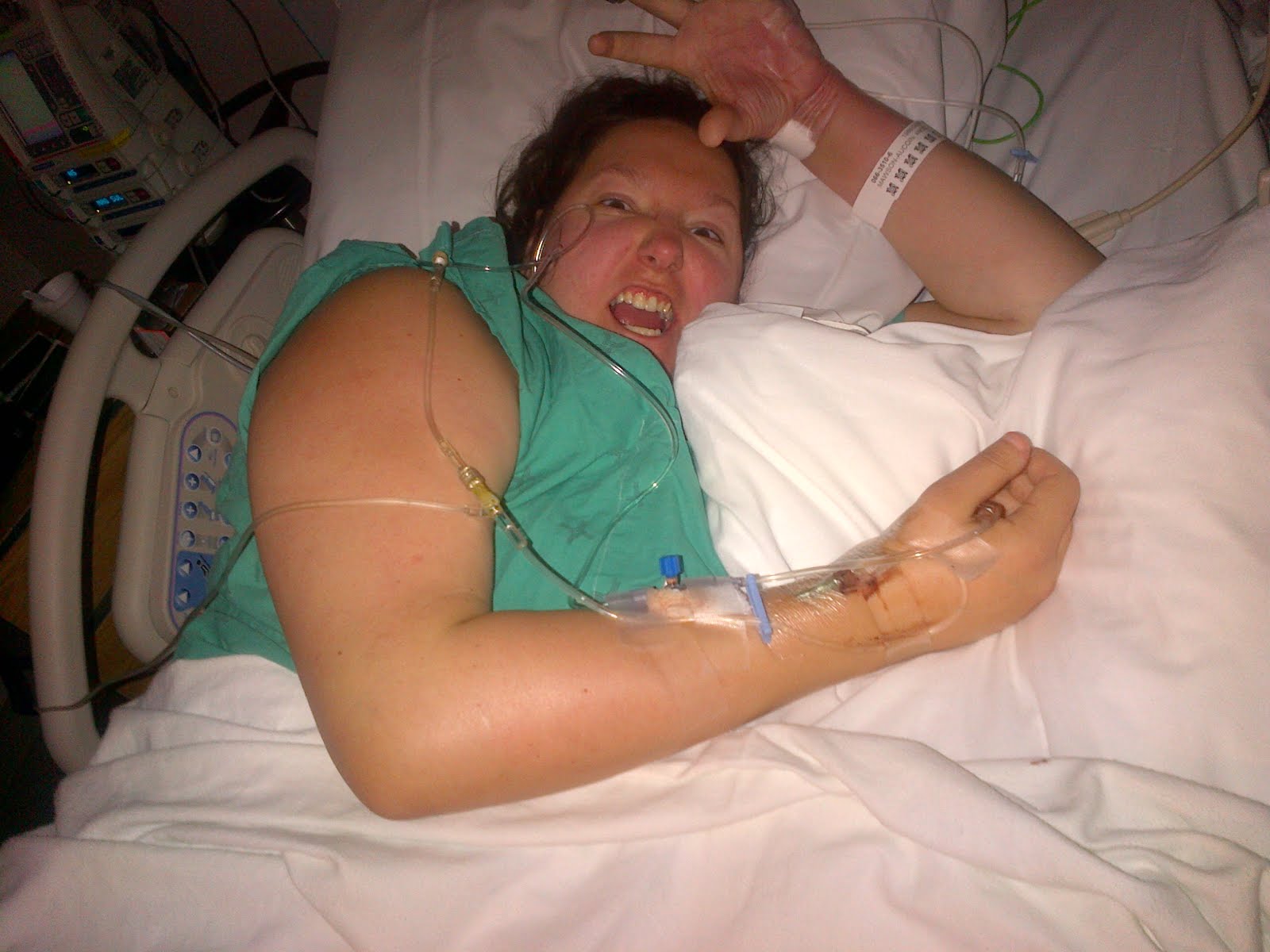 The morning of November 1, 2012, was “D-Day” – delivery day. We called my mom in Winnipeg an hour before the surgery, and told her that we had the green light to deliver, and what was happening. After some tears at both ends, she told me that she was going to go to mass, for the All Saint’s Day celebration. 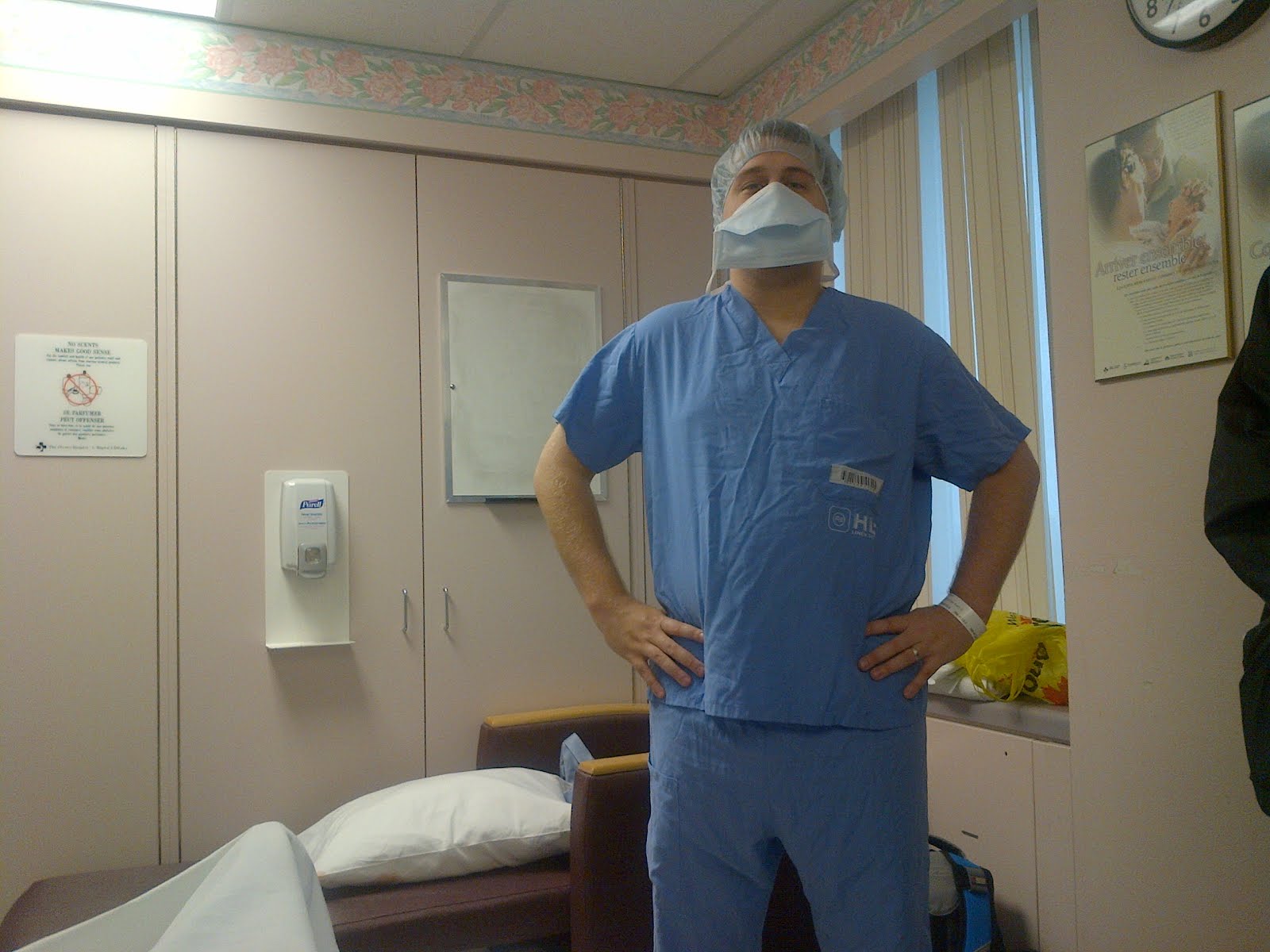 Noel all geared up for delivery!

As I was wheeled down the hall, I remember being calm, and I think I had accepted the fact that the baby was not going to survive this delivery. I shut down completely, and just tried to focus on the task at hand – I had never even had stitches before this point, and have never been a fan of hospitals. All of that being said, I was EXTREMELY calm.

Noel was making idle chit chat, trying to distract me no doubt. The epidural they gave me was painless, but again, I’m sure I was high on adrenaline. One of the funny parts to this is that they had me bend over and hug my knees while they inserted the needle. Because that was the last position my body remembered, it felt like I was hugging my knees to my chest throughout the entire procedure. I kept feeling like I was losing my balance, and asking Noel if he could hold me steady lol.

I felt nothing. I saw nothing. I refused to look at anything, and tried to keep my eyes closed, not wanting to listen to the conversations around me, and not to panic. Noel was chattering away, and I really have no idea what he was saying, but he did a great job in distracting me. All of a sudden, the nurse peeks around behind the sheet and says “Did you hear that?”. Of course, we hadn’t – Noel had been chatting, and I had been zoned out. Apparently, Peyton (our baby) had already been delivered, had cried on her way out, and was currently being assessed. I was in the process of being sewn back up from the C-section!

Once we found out that she was as well as could have been expected, the emotions started flowing, but cautiously. We tried not to ask questions, but received a few updates: that she had been 1 lb 9oz, a little smaller than expected (they had estimated 2 lbs), and that her lungs were great! She initially scored a 5 on the APEX scale, which was upgraded to an 8 on the second round – This was great news for us.

Noel also took advantage of this opportunity to tell me that one of the nurses had been wearing crocs in the surgery, and had loudly complained that when she broke my water, I “definitely got her”… apparently, she was soaked. 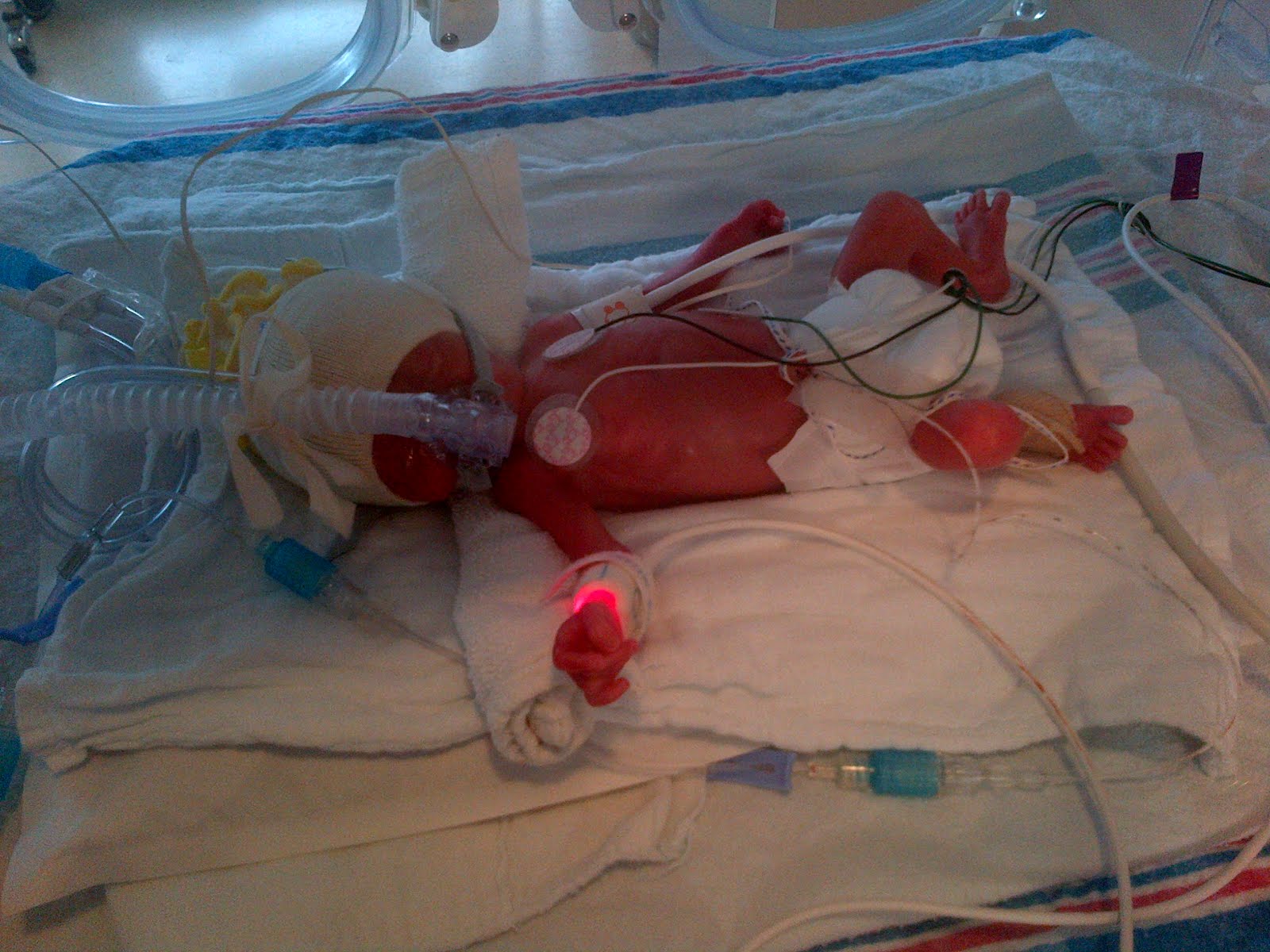 I don’t remember much of making it back to my room – I might not have been awake for it. Noel did have a chance to see Peyton once she was situated and stable in the NICU, so this is our very first photo of her.

Are you a mom of a preemie? Please leave a comment – I would love to hear about your experience!