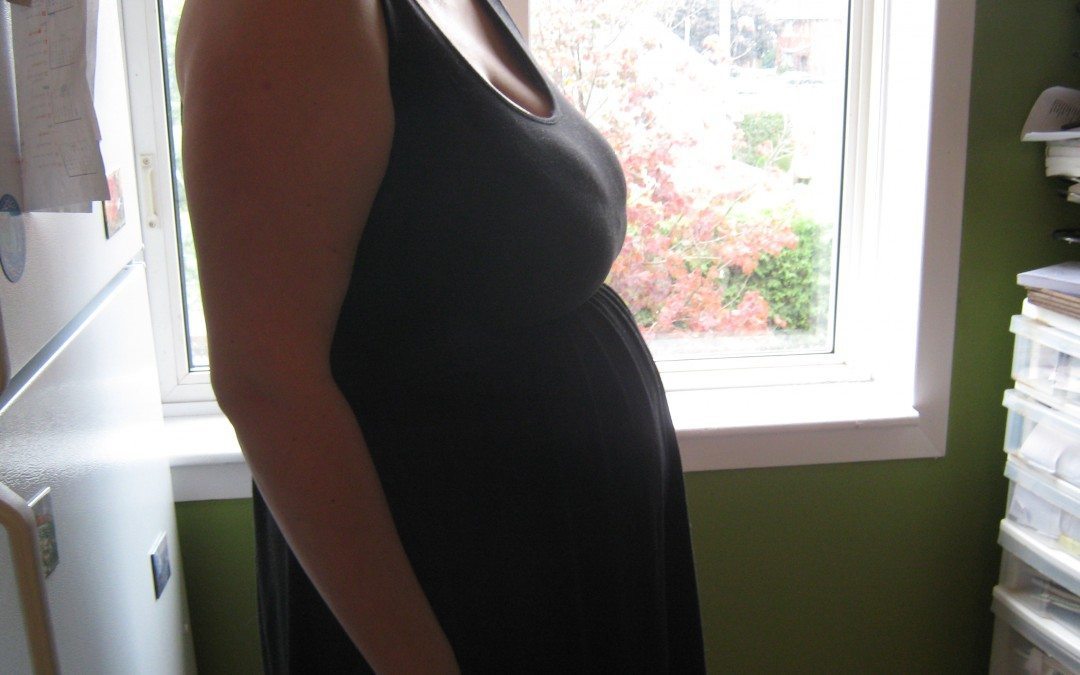 So Noel, my husband, was away on a dart trip in Trenton. I was 26 weeks pregnant and barely showing (Noel still hadn’t felt the baby kick, but that was partially because my placenta was in the front). Anyways, I was visiting my grandmother for the weekend because well, I could. How many more opportunities was I going to have to just take off for a weekend with no baby and no hubby, and just relax and get spoiled.

Arriving Friday afternoon, we had a busy weekend planned. My grandmother is an avid sewer, so we were going to make receiving blankets, cloth wipes, wet bags, and some nursing pads. However, as Friday slowly slipped away with many laughs, chats, hugs, tears, and fish (I say fish because we had at least 3 meals of seafood – I *love* seafood!), I found I was starting to feel less “well” – which is the only way I can describe it, because in comparison to how I felt pre-pregnancy, I was still rating an 8 out of 10. I had been experiencing very mild cramping, which was nothing compared to the cramps I used to get on my period, so I dismissed it as my first episode of “minor discomfort” (After a tiny bit of research in hindsight, it has been suggested that I had been experiencing Braxton Hick’s). Sleeping Friday night proved a little bit difficult, with a lot of tossing and turning. I tried sleeping on either side, and then tried with a pillow between my legs… nothing. I chalked it up to not being in my own bed, and trying to sleep in a twin bed after being used to a queen while pregnant. I eventually resorted to taking a Tylenol, and drifted off to sleep.

Over the weekend, the “cramping” was getting a little more intense and frequent, but I found warm lemon water made me feel a little better.We managed to get all of the cloth wipes cut and sewn before I needed to take a nap break. I didn’t have much of an appetite, and I had strongly been considering going home so I could just sleep in my own bed, but my grandmother didn’t think I should be alone in the house if I was not feeling well. I kept thinking to myself “so this is what it ACTUALLY feels like to be pregnant!” while quietly arguing with myself that something might be wrong, because I haven’t felt ill at all up to this point.

On Monday, I had a migraine (which is completely normal for me),  and I got myself into a big philosophical argument over whether I should take an Aleve or not – Aleve has always been my “relief” medication for my migraines. However, the rule is that Aleve is safe to take during your first and second trimester, but should not be taken during your third trimester. Noel and I were arguing whether me being in the beginning of my 26th week qualified for the second or third trimester. After being STRONGLY guilted out of taking Aleve, I settled for a Tylenol 1 and went to sleep off the headache.

I wake up, and it’s already Tuesday morning. Noel is kissing me on the cheek, and I’m trying to figure out what just happened to my last 24 hours. I think he is more concerned than I am, because this is the first time he has seen me complain about the pregnancy to date. I still have my migraine, and after the Tylenol 1’s that I took yesterday, I am seriously contemplating upping it to Tylenol 2’s. However, I tell him I am feeling much better, and shoo him out the door. So I roll out of bed, toss my hair into a ponytail, decide on a pyjama day, and then the phone rings – it’s my mother calling to check up on me. By the end of the phone call, it has been stressed that I should call my nurse and talk to her before taking that Tylenol 2. I knew I had a check-up on Thursday, so I really wasn’t too concerned, and had a list of questions I had planned on asking at my appointment. But, I called the high risk pregnancy unit and spoke with my nurse on the phone. I explained how I had been feeling over the past couple days, and then led up to my question of whether I could take a Tylenol 2. After a slight hesitation, she explained that she felt uncomfortable making that decision over the phone, and would prefer if I could come in for a couple of minutes.

Well, that pissed me RIGHT off. Why did I even bother with the phone call… now, not only do I feel like crap still, I don’t even have a flat answer to what felt like a very simple little question. I gave my uncle, who lives down the street, a quick phone call, and asked if he would mind dropping me off at the hospital on his way to work – I told him I would only be 10 minutes max… the length of time it would take me to get to the 6th floor and get a flat answer. Deal.

So, we get to the hospital, and he decides to wait downstairs for me. Great, so I scurry upstairs to talk to the nurse at high risk, and she promptly sends me to the maternity triage, who apparently are expecting me. Once I give them my name, they bring me into my own room, and sit me down to take my blood pressure. This new nurse is starting to ask me all sorts of questions, and I begin to get irritated. I tell her that I just want to take a Tylenol 2 and go back to bed, and that was the only reason I was her… but the questions continue. An alarm on the blood pressure machine goes off, and the nurse re-checks my blood pressure, scolding me for moving. I’m about to give her a piece of my mind, when the alarm goes off again, and she tells me I need to sit down and she was getting the doctor. At this point, I call my uncle on his cellphone and tell him he doesn’t need to wait for me anymore.

When she comes back with the doctor, he introduces himself, and hops up on the counter and sits down. He tells me to call him Adam, and he sees that I’m now clutching my list of questions in my hands. He asks for the paper, and tells me that he can read it for me, and then he can ask any questions that he has. So, I sit down, and he reads through my list out-loud. At the end of the list, he calmly tells me that most of what I had been experiencing sounded normal, but he was a little concerned about my blood pressure. After taking some blood-work, he sent me off for a quick ultrasound to make sure everything was ok.

Half way through the ultrasound, Dr. Adam comes in, and tells us that he knows what the problem is, and that we can stop looking for something internally. Upon returning to the triage, there is (and I am not exaggerating) at least 15 people in the room… nurses, doctors, EMS team, high risk consultants… I didn’t quite understand what was going on. One of the “assistant” doctors tried to explain, but all I really understand from her is that something was wrong. She begins explaining that they had a course the night before on a situation called Pre-Eclampsia with HELLP syndrome, something that they all felt I was experiencing right now. The blood test had confirmed it, and she proceeded to inform me that we were terminating the pregnancy. I automatically jump into protective mode, and I’m trying to figure out what’s going on, but all I can do is cry. Dr. Adam steps in at this point, and tells me that no, the pregnancy wasn’t being terminated, but the baby was going to be delivered soon. Because I was only 26 weeks 5 days, I needed to be transferred to a larger hospital immediately (which explained the EMS group). As Dr. Adam was trying to explain that my kidneys and liver were shutting down, he was clear to say that my baby was happy as a lark, and not to worry about her. He  advised me about a steroid I could take to help boost her lung development, and I consented. He let me know that I could do this once every 24 hours. At the end of this “debrief”, and as I was being transferred onto the bed they were going to ship me off in an ambulance in, I asked if I could call my husband and tell him what was happening.

That phone call was a little difficult. While I normally call Noel throughout the day, a call from my cell means I am out of the house, which was the first indicator for him. He asked how my day had been, and I told him it had been interesting. I’m not sure what the queue was for him, but he asked if I was ok.

All I could muster out through my tears was “No, I need you to meet me at the hospital…now.”